I work on S.H.A.D.E, (Sputtering high purity atomic deposition experiment) which is a chamber designed for physical vapor deposition research. My work is currently focused on understanding how the plasma conditions change under HiPIMS (High-Power Impulse Magnetron Sputtering), and HiPIMS with a positive kick pulse. HiPIMS is a pulsed method of magnetron sputtering that has been shown to have various advantages over traditional dc magnetron sputtering. We study the evolution of electron and ion energies throughout the pulses and do fast camera work to see visually how the plasma is influenced by the HiPIMS pulses and if we are forming regions of very dense plasma known as spokes. The significance of this research is that HiPIMS has been shown to lead to higher performing films, but many of the parameters one can control are not fully understood in how they effect the plasma. The goal is that by understanding how the plasma reacts by studying the energy distributions and the fast camera imaging, that new recipes can be developed for various applications. 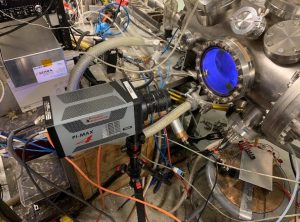