Learn more about IPI at https://ipi.illinois.edu/.

Working with the U.S. Department of Energy, CPMI researchers are trying to solve another challenge facing nuclear fusion research. If future reactors want to take advantage of the liquid metals technology being developed at places like CPMI, it is necessary to find a way to purify the liquid metal as it cycles through the reactor. The Distillation Column experiment is currently being used to study the recovery of hydrogen in a liquid lithium loop.

In this experiment, hydrogen desorption measurements are made from different Li/LiH mixtures. Reactor-relevant recovery rates for tritium self-sufficiency have already been successfully obtained. In order to maximize recovery, current studies are looking at the geometrical aspects of the H-H recombination process and the influence of Li impurities present. As the distillation column technology is further developed, it will eventually be integrated into a full loop with the HIDRA stellarator.

Funded by the Department of Energy, the SLiDE facility is dedicated to studying the phenomenon of TEMHD and its applications to Plasma-Facing Components for nuclear fusion reactors. When there is a temperature differential across a metal, a small thermo-electric (TE) current will flow along the direction of the temperature difference. If the metal is in a liquid form and a strong magnetic field is present, the magnetohydrodynamic (MHD) forces on the liquid metal will cause it to flow. The combination of these two phenomena – TEMHD – allows flowing metal films to be created which can potentially handle higher heat fluxes than conventional solid materials used in fusion devices.

The shape of the solid structure that the liquid metal flows across has a significant effect on how the liquid flows. Novel geometries being developed and tested at CPMI include 2D posts, porous metal foams, 3D printed materials, and curved surfaces.

Creating a plasma has traditionally required the use of vacuum chambers to achieve low gas pressures. However, it is actually possible to create plasmas at atmospheric pressures as well. The absence of vacuum chambers opens up an exciting new range of manufacturing possibilities, including higher volume and higher throughput processes. CPMI works with its industry partners to develop new ways to utilize atmospheric pressure plasmas for materials surface modifications.

Applying multilayer films of ZrO and SiO helps to protect materials from the natural elements. ZrO acts as a passivation layer to create resistance to corrosion, and SiO works as a water barrier. Uniform Zirconia coatings (100-200 nm) have been obtained using the atmospheric plasma torch, and the SiO’s resistance to water soaking has been tested. 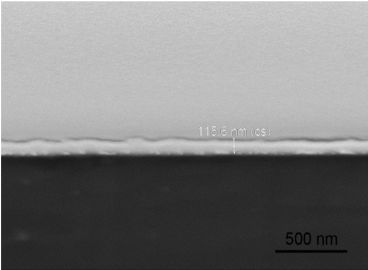 A uniform 116 nm coating of ZrO was deposited using an atmospheric plasma torch at CPMI.

CPMI researchers working with LyTen are using an atmospheric plasma torch to deposit mixed carbon-metal composites. Surface modifications of materials can actually impact their bulk properties, and the goal of this research is to improve thermal, electrical, and mechanical properties of things ranging from electrical lines to batteries and heat exchangers. Experiments will be developed with different composites, including copper, aluminum, and silver.