Congratulations to CPMI graduate student Liang Meng on passing his prelim today. We are all very proud!

CPMI has concluded the search for a new postdoctoral researcher and will welcome a new member of the team this February.

CPMI Welcomes S. B. Bhatt, Vaccum Division Head of Tokamak ADITYA,  from the Institute for Plasma Research in India. Bhatt will be giving a seminar entitled “Wall Conditioning in Tokamak Aditya,” on Monday afternoon from 2 PM – 3 PM in Rm. 103 Talbot Lab.

Two of CPMI’s PhD students did the Center proud at the recent Symposium on Fusion Engineering (SOFE) Conference in Chicago. Both students were nominated for the SOFE student paper award. Wenyu was the eventual winner of the award, with a $500 cheque and plaque while Soonwook was runner up. 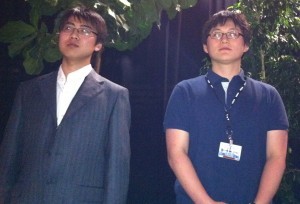 Wenyu presented a paper on his LiMIT concept. LiMIT is a device that is being developed using liquid lithium metal to be able to absorb the high heat fluxes in the divertor of a Fusion reactor and be able to pump this away while replenishing itself, thus effectively eliminating damage to the divertor itself.

While Soonwook’s presentation was in his recent investigations on lithium vapor shielding for with molybdenum in DEVeX. The DEVeX device is able to simulate an high energy strike using a theta pinch and can obtain high plasma temperatures and densities to simulate the edge of a fusion plasma. 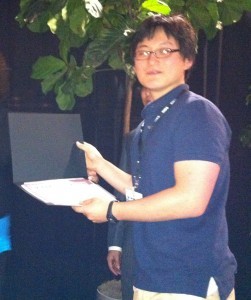 Both students gave presentations to a panel at the conference and it was eventually decided that Wenyu had the best paper at the conference. Wenyu received the award at the SOFE Conference dinner on Wednesday night. 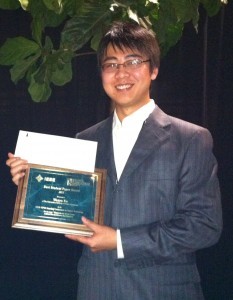 Wenyu with his prize for the best Student Paper for SOFE.

Everyone at CPMI are proud of the work that Wenyu and Soonwook have done and this wonderful recognition of their and the CPMI’s work in fusion.

A laser-assisted plasma-coating technique at atmospheric pressure (LAPCAP) has been investigated. The electron temperature, electron density and gas temperature of the atmospheric-pressure plasma have been measured using optical emission spectroscopy (OES). LAPCAP utilizes laser ablation of 3 mol% yttria-stabilized zirconia into an atmospheric helium/nitrogen plasma to deposit thermal barrier coatings on a nickel-based substrate. The deposited film shows columnar structures similar to films prepared by high-vacuum deposition methods, such as physical vapour deposition and conventional pulsed-laser deposition. However, the LAPCAP films have smaller columns and higher porosity, compared with the films deposited by other techniques. The morphology and characteristics of the films have been analysed by scanning electron microscope, focused ion beam and x-ray diffraction.

Further great news with this article is that one of the images will be featured on the cover of the Journal in the edition its published. Congratulations to everyone involved!

In order to get undergraduate and even high school students interested in plasma science, the CPMI often gives tours to highlight our research projects. As part of these tours, plasma demonstrations are shown so that students get a better understanding of the power of plasma! 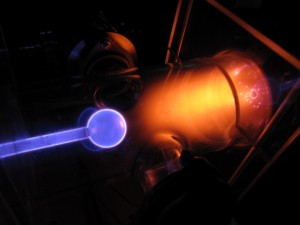 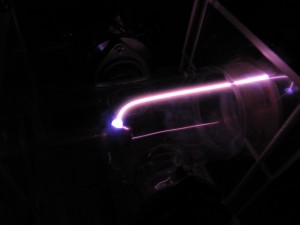 On the 29th April, 2011, six new Bliss Professors of of Engineering were announced by the College of Engineering at the University of Illinois. CPMI’s director, Prof. David Ruzic was amongst this prestigious group, which include: Stephen Boppart, Kent Choquette, Phillipe Geubelle, Jiawei Han and Albert Valocchi. It is a wonderful recognition and reward for the hard work that David has put in over the years.

CPMI would like to Congratulate David and all the other 5 Bliss Professors that have been announced.

To read the full announcement, please click here. Below is a biography on David Ruzic: 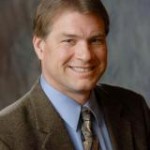 zic joined the Department of Nuclear, Plasma and Radiological Engineering as an assistant professor in 1984. Today, he directs the Center for Plasma Materials Interactions which studies particle-surface interactions relevant to fusion power and materials processing systems through a combination of computational and experimental means.

A leading researcher in the creation of EUV (extreme ultraviolet) lithography sources and associated equipment for creating semiconductor chips at the 22 nm node, Ruzic has led all College of Engineering faculty in sole-PI direct industry funding, averaging over $1 million per year for the last seven years. Industry partners include Intel, Micron, Ushio (Japan), Xtreme Technologies (Germany), Sematech, ASML (Netherlands), Cymer, Energetiq, Kurt J. Lesker Co., Starfire Industries, Novellus, the SRC, and most recently, the Wrigley Company. Ruzic has three distinct funded Department of Energy grants from the Office of Fusion Energy Sciences, primarily due to his leadership in the development of liquid Li cooled fusion reactor components, a concept he developed that is now employed in at least two of the five operating fusion experimental systems around the world. His work in plasma research has been featured on the Discovery Science Channel’s “Weird Connections” program; he has written two book chapters and 130 refereed publications, and has been granted four patents in the last three years.

About the Bliss Professorships

The Bliss Professor of Engineering is the result of a bequest from the late Helen Eva Bliss in memory of her father, Abel Bliss Jr., who entered the University in 1872 to study civil engineering, but was forced to leave before completing his degree. In June 1874, the University granted him a partial certificate in civil engineering. His business ventures included agriculture and real estate, and by 1929, he was a partner in the land development and oil production company of Bliss & Wetherbee. Mr. Bliss died in the mid-1930s. Miss Bliss graduated from the University of Illinois in 1911 with a degree in Liberal Arts and Sciences. Early in her career, she taught engineering at a Shreveport, Louisiana, high school, and later did clerical work with the Bureau of Aircraft Production in Washington, D.C. From 1936 until her retirement in 1962, she worked for the Washington law firm of Ivins, Phillips & Barker as an executive secretary. A portion of the Bliss bequest went to support the Grainger Engineering Library and Information Center Endowment as well as other projects for “advancing the scholastic activities of the School of Engineering.”