CPMI’s own Matthew Parsons was featured in Science Magazine this week! Young scientists from a variety of fields were asked to address the issue of what changes are required to preserve Earth’s ecosystems and biodiversity, specifically in their field. Matt’s response was featured: “To protect our environment, we must replace fossil fuels with cleaner energy options. One possibility, nuclear fusion, produces energy when hot hydrogen nuclei collide to form helium. At such high temperatures, hydrogen becomes
a new state of matter: plasma. Plasma physicists and engineers around the world are working together to learn how to con- trol plasmas, so that the energy produced in fusion reactions can be used to create electricity.” The entire article can be found here! Congratulations, Matt!

CPMI Director Professor Ruzic and graduate students Dren Qerimi and Gianluca Panici were in San Jose this past week at the SPIE Advanced Lithography Conference. While at this conference, Gianluca was featured in an oral presentation on his poster on Study of ion-enhanced Sn removal by surface wave plasma for collector cleaning!

Postdoctoral search now OPEN! The Center for Plasma Material interactions (CPMI) at the University of Illinois at Urbana Champaign is looking to fill in a position at the post-doctoral research associate level, who will work on research areas relevant to plasma material interactions for several applications.The Center for Plasma-Material Interactions currently has 12 graduate students, and over 20 undergraduate researchers. In particular, we are looking for expertise in the field of atmospheric pressure plasmas for material modification/coatings.

Congratulations to Peter Fiflis for being named the 2017 Ross J. Martin Award recipient!  The college-wide selection honors an outstanding graduate student for their research achievements – both in quality and magnitude. More information regarding the award can be found at this link. Congratulations, Peter, on a very well deserved award!

CPMI had a special visitor on Wednesday! President Tim Killeen visited and toured the lab, learning about CPMI and HIDRA from Professors Ruzic and Andruczyk. We were very excited about him coming to visit and learning about our liquid-metal fusion research. 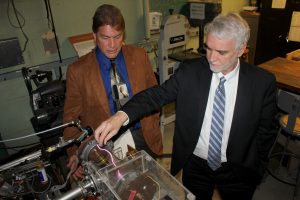 It’s true! Prof. Ruzic is back at it again with his famous demos, this time regarding surface tension. As part of NPRE/ENVS 101, Prof. Ruzic utilizes demos (and explosions) to intrigue students and energize their learning of new topics. As Chris Angel once did, Prof. Ruzic put his own spin on the “walking on water” trick. His own version included walking on water at the Activities and Recreation Center and teaching students about the concept of surface tension. His video can be viewed  at https://youtu.be/rvi8Wd9rAlA

Prof. Ruzic is currently in Athens, Greece attending the seventh iPlasmaNano conference as an invited speaker! His talk is titled “Nano-Texturing by Femtosecond Laser Application” and he is excited to share. Throughout the week, he will be attending various talks related to plasma nano science, nanotechnology and its applications. More information regarding this conference can be found at http://www.iplasmanano.org/index.php.

CPMI is proud to announce that we have received a grant from LAM Research entitled “System to Measure Nitrogen Radical Concentrations”. We are excited to expand our work with LAM into this new area. Additionally, we welcome back our senior-most graduate student, Jason Peck, after his very successful 6-month internship at LAM!

Professor Ruzic was formally renamed as the Scientific Director of the International Union for Vacuum Science, Technique, and Applications (IUVSTA) at last month’s International Vacuum Congress (IVC-20), which was held in Busan, Korea. This officer position has a 3 year duration during which he will lead efforts across all nine technical divisions to sponsor schools, workshops, and technical training courses in and among the 33 member countries.  IUVSTA is an umbrella organization of “vacuum” or “surface and interfaces” technical societies from across the world.  More information can be found at http://www.iuvsta.org

The Office of Fusion Energy Science, part of the US Department of Energy, has awarded $1.05 million dollars to the HIDRA plasma/fusion facility for performing fusion-relevant materials science on lithium as a Plasma Facing Component (PFC). HIDRA is especially well-suited to materials testing thanks to its long shot durations and many ports that can be dedicated to materials experiments. Lithium is a promising PFC candidate for future fusion reactors, but performing lithium experiments in existing fusion devices, such as HT-7 in Hefei, China, can be difficult and time-consuming. With this grant, the first government grant HIDRA has received so far, lithium studies can be conducted in-house at the Center for Plasma Material Interactions, without the need to coordinate experiments with other research teams. Professor Daniel Andruczyk, head of HIDRA operations and creator of an undergraduate-level course which focuses on giving students hands-on experience with HIDRA, plans for HIDRA to become a user facility accessible by scientists both on and off campus, providing the first dedicated materials testbed for fusion science in the country.