Monday 25th of April had CPMI’s Assistant Research Professor, Daniel Andruczyk, on the local NPR radio station WILL talk show “The 21st with Niala Boodhoo” discussing HIDRA and fusion. Some of the questions asked were about what fusion actually is and the type of research that will be undertaken in HIDRA. Of course the question always is asked, how long will it be till we see a functioning fusion reactor? Well, for the answer you will need to have a listen.

The Hybrid Illinois Device for Research and Applications (HIDRA) is a toroidal plasma device at UIUC, formerly known as WEGA when operated in Greifswald. The HIDRA vacuum vessel has a circular cross section and a major radius of R = 0.72 m and a minor radius a = 0.19 m, with a steady state toroidal magnetic field BT < 0.5 T. A limiter can be used with reduced plasma minor radius between 0.10 – 0.15 m. Since HIDRA has the ability for long pulse steady state operation via the classical stellarator configuration, HIDRA has an actual toroidal magnetic field, just like a tokamak. HIDRA also has the capability to operate as a tokamak and thus a pulsing capability during steady operation allows simulation of transient events. Initial plasmas will use 2.45 GHz magnetron heating up to 26 kW and should achieve Te ~ 20 eV and ne ~ 1×1018 m-3. Even though these plasma parameters are much lower than that of larger devices like EAST, the plasma and magnetic fields at the first wall are very close to those produced in HIDRA. The steady state and pulsed capabilities of HIDRA make it an ideal test bed for liquid Li science and technology, where flow, ejection and recycling can be assessed. 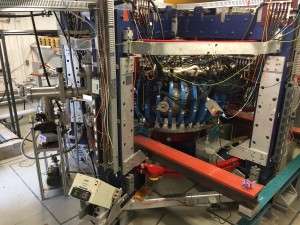 Fusion is the process of taking two light atoms and providing them with enough energy that they are able to fuse to form a heavier atom. This is the opposite to fission where atoms are split. This is the energy source that drives the stars! One example of a fusion reaction is the formation of helium from the fusing of deuterium and tritium and releasing 17.6 MeV of energy.

Energetically this is the easiest of the fusion reactions and there are many other fusion reactions, that in the future may be utilized. Many universities and laboratories around the world have pursued the dream of fusion energy since the 1950’s. It promises to be a clean source of energy producing no CO2 and no radioactive waste. However, technologically fusion has proven to be quite complicated to achieve over the years, just imagine how do you confine a plasma that is over 100 million oC. There are two main magnetic confinement devices that are studies, tokamaks and stellarators.

It turns out that the interactions between the plasma and surfaces in fusion reactors play a major role in the ability for these machines to operate successfully with good confinement, minimal transient events and being able to withstand the particle and heat flux to the surfaces. Power flux at steady state operation can be as high as 10 MWm-2 and during a transient event such as a disruption or ELM can get as high as 100 MWm-2. Most materials cannot withstand this and so new ways to protect surfaces or new materials that can withstand the fluxes need to be developed.

HIDRA will be at the forefront of studying plasma material interactions and developing the technology needed for innovative plasma facing components that will make fusion a viable energy source of the future.

Today at 4:15pm, the Hybrid Illinois Device for Research and Applications (HIDRA) had its first plasma.  HIDRA, the former WEGA stellarator/tokamak, arrived at Illinois in Nov. 2014 and has been under reconstruction for the last 18 months.  All of the support systems – -power, water, vacuum, etc. are now operational and today marked the first confined plasma.   The HIDRA First Plasma event was attended by over 100 people including the Dean of Engineering, the Nuclear, Plasma and Radiological Engineering Dept. Head, most of the faculty and numerous alumni visitors.   The hard work of Prof. Daniel Andruczyk and many undergraduate and graduate students as well as help from the Universities Facilities and Services has paid off!

Last month CPMI submitted a total of four proposals to fund HIDRA.  Several of these were collaborations with other institutions.  We will find out in several months if we can breathe life into our five-fold-symmetry monster!

An article about HIDRA written by all the CPMI Professors has just appeared in the US Burning Plasma Organization monthly newsletter.  We were invited to write this, showing that the community has noticed the new machine and opportunities at Illinois.   See current USBPO e-news .  HIDRA construction is still proceeding on schedule with first plasma expected in Fall 2015.