The Office of Fusion Energy Science, part of the US Department of Energy, has awarded $1.05 million dollars to the HIDRA plasma/fusion facility for performing fusion-relevant materials science on lithium as a Plasma Facing Component (PFC). HIDRA is especially well-suited to materials testing thanks to its long shot durations and many ports that can be dedicated to materials experiments. Lithium is a promising PFC candidate for future fusion reactors, but performing lithium experiments in existing fusion devices, such as HT-7 in Hefei, China, can be difficult and time-consuming. With this grant, the first government grant HIDRA has received so far, lithium studies can be conducted in-house at the Center for Plasma Material Interactions, without the need to coordinate experiments with other research teams. Professor Daniel Andruczyk, head of HIDRA operations and creator of an undergraduate-level course which focuses on giving students hands-on experience with HIDRA, plans for HIDRA to become a user facility accessible by scientists both on and off campus, providing the first dedicated materials testbed for fusion science in the country.

The Center for Plasma-Material Interactions would like to officially welcome our newest post-doctoral research scientist, Dr. Sabrina Hammouti! Her expertise in laser systems and laser-surface interactions will be of vital importance to several exciting CPMI projects, including the Dry Etch Assisted by Laser (DEAL) project and much more. We look forward to having Sabrina on the team.

“In-Situ Collector Cleaning and EUV Reflectivity Restoration by Hydrogen Plasma for EUV Sources,” a paper by CPMI graduate students Daniel Elg and Gianluca Panici, has just been accepted for publication by the Journal of Vacuum Science and Technology A! Extreme Ultraviolet Lithography is the next step for the photolithography systems used to manufacture ever smaller computer chips. Their research concerns the use of an in-situ Hydrogen plasma to remove deposited Tin from the extremely sensitive reflectors used in EUV systems, allowing for significantly less downtime in the manufacturing process. After publication, a link to the paper will be added to the paper’s entry on the CPMI Publications page, where you can find links to download all published CPMI papers.

In addition to the short course, Dr. David Ruzic gave an invited talk titled Design of LiMIT Type Test Module as a Limiter. Dr. Andruczyk presented the status of and progress made on the Hybrid Illinois Device for Research Applications (HIDRA) and gave a second, invited talk on HIDRA and the Materials Challenges for Stellarators. Graduate students Matthew Szott and Peter Fiflis gave talks on wetting of nanostructured surfaces by liquid lithium and tin & the time-resolved observation of tungsten nanostructuring due to helium plasma respectively.

Conferences such as SOFE are an essential and exciting part of CPMI’s role in participating in the global research community and continuing to conduct cutting edge science. In addition to the mutual exchange of knowledge and experience characteristic of every good scientific conference, CPMI’s involvement in the previous SOFE in 2013 led directly to our acquisition of HIDRA (formerly WEGA) – what will result from this year’s SOFE remains to be seen.

The Hybrid Illinois Device for Research and Applications (HIDRA) is slowly but surely coming together! HIDRA is a medium-sized fusion device that will be used primarily as a materials testbed for fusion research. CPMI students and faculty have been hard at work assembling HIDRA and its supporting infrastructure, bringing us ever closer to striking first plasma. Take a look at the time-lapse below to see how far we’ve come:

See if you can spot the small hydra statue kept in view of the time-lapse camera during assembly!

As part of the Plasma Surface Interactions: Bridging from the Surface to the Micron Frontier through Leadership Class Computing SciDAC project, we are working to better understand how plasma facing components (PFCs) will interact with burning fusion plasmas. Researchers at CPMI are investigating processes like sputtering, re-deposition, and evolving surface roughness with Monte Carlo, binary collision approximation (BCA) codes. We have designed and developed several surface roughness models for TRIDYN (resulting in the Fractal TRIDYN code, or FTRIDYN) and are using these to investigate the role surface roughness plays in ballistic ion-surface interactions. 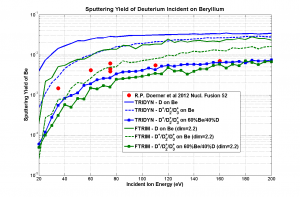