CPMI senior graduate student, Priya Raman, was awarded the Dorothy M. and Earl S. Hoffman Scholarship award at the 61st International AVS meeting last week. The prestigious honor and cash prize was awarded for her pioneering work in magnet pack development for use in High-Powered Pulsed Magnetron Sputtering (HPPMS/HiPIMS). She is also a named inventor on a patent recently submitted by CMPI on this device, which will become a product of the Kurt J. Lesker Company. All of us here are very proud of her accomplishments, drive, and spirit. Go Priya!

This entire week trucks are rolling in to the Nuclear Radiation Laboratory with components of HIDRA. The crates are huge and taking all day to move from the trucks to inside the building. The University’s largest crane is set-up in the parking lot. What excitement! The fact that everything is packed so well and organized is a great testament to Prof. Daniel Andruczyk’s planning and effort.

Dr. Martin Nieto, who received both his Master’s (2000) and Doctorate (2004) from the University of Illinois in Nuclear Engineering, has returned for a month-long research collaboration at CPMI. Dr. Nieto has been a regular collaborator of NPRE professor Dr. Jean Paul Allain and has also published with Dr. David Ruzic in the past. Dr. Nieto’s permanent home is Mexico City’s National Polytechnic Institute (Instituto Politécnico Nacional).

Dr. Francisco Tabarés, a fusion researcher at CIEMAT (Centro de Investigaciones Energéticas, Medioambientales y Tecnológicas), a large multi-discliplinary laboratory in Madrid, Spain, has arrived for a short research collaboration with the CPMI faculty and students. Dr. Tabarés will remain in Urbana-Champaign until the 27th of July.

Priya Raman was recently selected as a finalist for the American Vacuum Society’s 2014 prestigious national student awards. Raman’s primary area of research is understanding High-Powered Pulsed Magnetron Sputtering (HPPMS or HiPMS). She is one of eight finalists for AVS’ five national awards which recognize excellent research in the areas of vacuum systems, materials, and thin film technology. She will be interviewed by a panel and also give an oral talk at the AVS meeting in Baltimore this Fall. Go Priya! 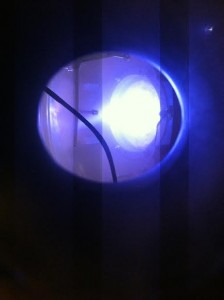 CPMI would like to officially welcome an additional Postdoc, Kishor Kalathiparambil, who has come to work at CPMI after receiving his Ph.D. from the Institute of Plasma Research from Gandhinagar India. CPMI looks forward to having Kishor on the team.

CPMI would like to officially welcome it’s newest Postdoc, Ivan Shchelkanov, who has come to work at CPMI after receiving his Ph.D. from Moscow Engineering Physical University. CPMI looks forward to working and benefiting from Ivan’s experience.

CPMI’s own postdoc, Davide Curreli, has be selected to be one of the new plasma professors at the University of Illinois at Urbana-Champaign. His new position has brought him also the position of being an Assistant Director for the Center for Plasma and Material Interactions.