The CPMI lab this week has taken on a new type of reserach … Movies! A local Champaign Production Company, Tangeant Productions, have taken over one of the Undergrad labs which will be the main scene for their new movie “The Window into Time”. 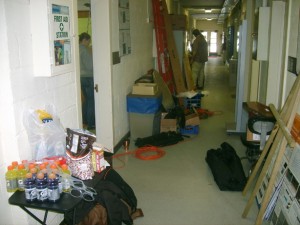 Equipment in the CPMI hall during the production

The Film is about a Professor (Bill Kephart) and his assistant (Stephanie Swearingen) discovering documents on the synthesis of a forbidden and forgotten substance. The dangers of going into the unknown are revealed when supernatural powers are unleashed by the Professor with devastating consequences. 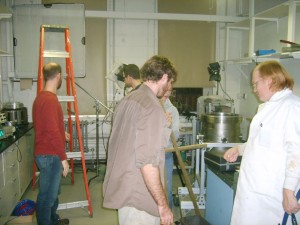 Crew and Actors prepping for a scene

The members of the shoot, which include Thomas Nicol, Chris and Anne Lukeman, Sean O’Leary and Tim Meyers in production with Stephanie Swearingen and Bill Kephart acting, have been very excited to be able to use a real life lab with equipments that is used in actual experiments. members of the CPMI lab have also been involved providing technical consultancy on what some of the equipment does and how it would relate to the movie. On the flip side the film crew have been been able to see how real life experiments are performed, observing (from a distance) the running of CPMI’s DEVeX 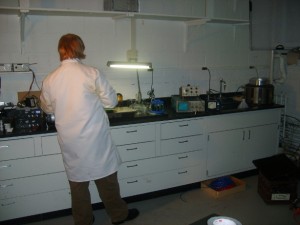 Bill Kephart doing a scene from “The Window into Time”

Stay in touch for more info when “The Window into Time” comes out!