Originally completed in May of 2009, the Solid/liquid lithium divertor experiment (SLiDE) was designed with intention of studying surface tension driven flows in fusion relevant magnetic fields and conditions which would be applicable to divertors and limiters. The work was spurred on by the findings from the Current Drive Experiment-Upgrade (CDX-U) which is housed at Princeton Plasma Physics Laboratory (PPPL). The CDX-U experiment reported the ability of flowing liquid lithium to handle an electron beam generated heat spot of 60 MW*m-2 without notable evaporation. Later a series of experiments on SLiDE project conducted by Dr. Michael Jaworski proved that the strong heat flux mitigation ability of liquid lithium surface is due to thermoelectric magnetohydrodynamics (TEMHD) driven flow. Strong liquid lithium swirling flow was discovered in experiments, which is the first time that TEMHD driven flow is directly proved since it was firstly raised by Shercliff in 1979 [1]. [Video of Lithium Swirling]

Thermoelectric effect, or called Seebeck effect which is commonly known as the key phenomenon for thermocouples, means the temperature gradient along the interface of two different types of material with different thermoelectric coefficient (Seebeck coefficient) can generate a current through the material. When a transverse magnetic field exists and one of the material is in liquid phase the Lorentz force can obviously drive the liquid to flow. Both Lorentz driven force and MHD damping affecting the flow is so called TEMHD.

In the LiMIT design, many narrow trenches are built in parallel with millimeter thick gaps between each other and the trenches are placed radially as the divertor target plate. The toroidal field is perpendicular to the side walls of trenches and the center surface receives narrow heat flux. Once the temperature gradient establishes between the top and bottom of the trench structure a thermoelectric current is generated in the opposite direction of the temperature gradient.  Since this current is perpendicular to the toroidal field the lithium flow is driven along the trenches in the radial direction across the narrow heat flux strike point. 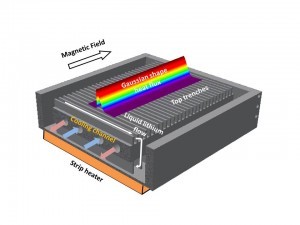 TEMHD driven liquid lithium flow in trenches was proved on SLiDE project. With the help of the fast speed camera the movement of the surface can be directly recorded. The lithium flow seems fast and smooth (0.22 ± 0.03 m/s) when the field is low (0.0589 T) while it becomes slower (0.13 ± 0.02 m/s) and having more surface variation when the field is increased (0.19 T). [Video of High Flow] [Video of Low Field Flow] Other than the function of keeping the liquid lithium surface fresh to face the plasma the heat transfer ability of this TEMHD driven trench flow is also observed by IR camera and embedded thermocouple measurements. IR images show that the uneven temperature distribution always follows the flow direction. 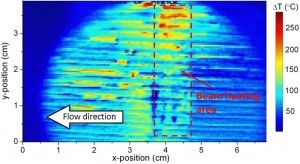 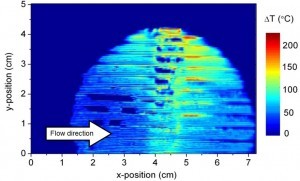 The results from SLiDE project initiate worldwide interests from many fusion research institutes which enable the international collaborations to examine the LiMIT concept on important fusion related devices such as HT-7, EAST, Magnum-PSI and LTX. The test of LiMIT concept as a movable limiter on HT-7 proves that liquid lithium can be driven by TEMHD effect in fusion relevant magnetic field. Future experiments of LiMIT concept on EAST, Magnum-PSI and LTX will further investigate the flow and related heat transfer in strong magnetic fields and how the trench flow will affect the fusion plasma.