The plasma facing components in fusion reactors are subject to a number of high flux/high energy events during normal operation of the device. The Divertor Edge and Vapor shielding eXperiment (DEVeX) was developed to produce a pulsed, high density, high temperature plasmas capable of simulating the conditions in events such as type I Edge Localized Modes (ELMs). Several theoretical models predict that evaporated and ejected material from the surface of the PFCs will become ionized during these events forming a vapor cloud, which will absorb some of the incident plasma energy and reduce the erosion and heat loading on the surface of the PFCs. The end goal of DEVeX is to study the dynamics of the vapor cloud that is formed and provide a benchmark for the theoretical models. 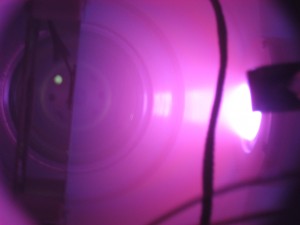 Lithium magnetron on DEVeX running in an argon atmosphere to deposit lithium on the target surface.

Previous work conducted on the ESP-gun experiment showed that in order to produce high density plasmas in a theta-pinch, a fast rise time (< 2 microseconds), high current capacitor bank is required. Subsequently, a capacitor bank is being designed and built that can operate up to 60 kV with 64 kJ of stored energy, which should be more than adequate to produce the desired plasmas.

Several diagnostics, such as a triple langmuir probe (TLP) and an optical spectrometer, are present in the target chamber to measure the density and temperature of the simulated ELM plasma. Additional diagnostics, such as an infrared temperature diagnostic, are planned as the experiment progresses. In order to investigate material erosion by exposure to a burst of high density plasma in a laboratory setting, plasma diagnostics and target analysis of a theta pinch device are carried out. A series of quadruple-probe diagnostics show that plasma sustains approximately for 100 μs at each pulse, with 1.0±0.2(10)21 /m3 plasma density and 12.5±2.5 eV electron temperature. However, when preionization takes place in conjunction with the main bank discharge, density and electron temperature show a few spikes at 1021-1022 /m3 and 30±10 eV. The temperature rise of the target is measured by thermocouple and corresponds to the energy deposition estimated by plasma parameters.

In the near future, DEVeX will be incorporated with the current generation SLiDE project where it will be used or the pushing of divertor/limiter plasma facing components. Such work is greatly important as in the edge and divertor region of the plasma, tokamaks experience off-normal events that cause intolerable damage to components of the reactors, which will become a much more serious issue in ITER. To simulate extreme events in a tokamak and provide a test-stand for liquid lithium plasma-facing components, a pulsed plasma source utilizing a theta pinch in conjunction with a coaxial plasma accelerator has been developed. The ThermoElectric-driven Liquid-metal plasma-facing Structures (TELS) device will provide fusion-relevant plasmas incident on targets with flowing liquid lithium surfaces. 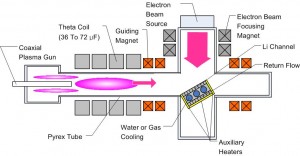 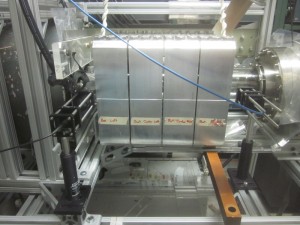